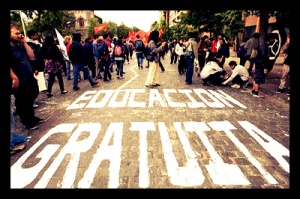 Recently, I spoke with Dr. Beatrice Avalos-Bevan, Associate Researcher at the Center for Advanced Research in Education, at the University of Chile, in order to follow-up on an earlier post about the recent reforms in Chile. In that post, we noted that reports on educational reforms in Chile made it seem that the country might be putting an end to private education. Diane Ravitch also commented on these reports and followed up with Mario Waissbluth. As we explained in our earlier post, while the country is not ending private education, President Michelle Bachelet aims to eliminate parental payments or co-funding of subsidized private schools and increase funding for all schools by implementing new education and tax reforms that would help pay for a more equitable education system.

In conversation with Dr. Avalos-Bevan, we spoke about the issues of educational inequality that have captured the attention of teachers and students, leading to the large and sometimes violent protests over the past decade. Beginning in 2006, protests were organized by secondary students during the first term of President Michelle Bachelet’s administration – a movement that came to be known as the “Penguin Revolution” (after the white shirts and dark jackets of students’ school uniforms). The protests became more numerous and violent during the following Sebastián Piñera administration. When Bachelet returned for a second term as President in 2014, she was elected on an education reform platform that was embraced by students and teachers, and she even brought some of the former student leaders in to work in her administration.

As Mario Waissbluth explained in our last post, the “first wave of legislation” was sent to Congress in May; however, students continue to be dissatisfied because initial actions did not consider as yet changes in the administration and improvement of municipal or public schools, although these have been announced for the second semester of this year. This has caused students and teachers to reconvene their street protests as a way to put pressure on the administration and call attention to their ongoing concerns this past June. Those protests ended with the use of tear gas on thousands of university students

As Dr. Avalos-Bevan explained, in the current system there are public or municipal schools, subsidized private schools, and elite private schools. The concern over inequality stems from the fact that the subsidized private schools are able to collect money from the government while also charging tuition. As a result, these schools receive a level of funding that the public or municipal schools cannot attain. Over time, the student population attending public schools has been shrinking, as more families strive to place their children in well-resourced subsidized schools.

The student protests have honed in on school funding because the students personally experience the increasingly segregated school system and the differences in the quality of education provided by the public or municipal schools versus the subsidized private schools. They also pay attention to the country’s poor performance on international assessments, such as Pisa and TIMSS, and attribute it to the flaws they see in the system.

Dr. Avalos-Bevan explained that in order to create a more equitable system, all schools need to receive a higher amount of government funding. For this reason, President Bachelet has suggested increasing taxes by 3% of gross domestic product, and increasing the corporate tax rate to 25% (up from 20%). President Bachelet will also stop funding of current private subsidized schools that operate on a for-profit basis, making all subsidized primary and secondary education free, creating more universities and increasing kindergarten funding and pre-K institutions.

Colegio de Profesores, the largest teachers’ union in Chile, joined the student effort and held a strike last month to protest President Bachelet’s reform efforts, which they say don’t go far enough to address the fundamental issues of inequality that plague Chilean schools. Despite what some have seen as indicators of significant reform, others are concerned that the process has not encouraged “adequate public participation in the bill-writing process.”

In addition to refining school funding in Chilean schools, Dr. Avalos-Bevan says that there is a similar problem with private universities and the teacher preparation programs they have created. In the years between 2004-2010, private colleges have increased and are now being criticized for what many identify as an increase in profits without sufficient evidence of quality education. These institutions are known to admit students to their teacher education programs with very low qualifications, who graduate without adequate skills. According to Dr. Avalos-Bevan, the government has created a test (the Prueba Inicia, or Start Test) that aims to assess the students’ content knowledge as they leave university, but the test is currently administered on a voluntary basis. Therefore, many teachers graduate without taking this assessment. Of the few who take this test, many perform poorly.

Despite this issue of teacher education, Dr. Avalos-Bevan believes the main problem has to do with teachers’ working conditions. Salaries are low compared with those who enter professions that require the same level of education (4-5 years), and 75% of a teacher’s contract time has to be spent teaching in the classroom (27 hours per week, which is the highest of all OECD countries, according to the latest TALIS survey), leaving little time for planning, grading, and meeting with other teachers. Dr. Avalos-Bevan would like to see the establishment of a teaching career, with specifications as to how teachers may progress, what kinds of salaries they may achieve, and paths for them to move into other positions in the education system. Currently, there is a strong civil society movement pushing for changes in this direction that expects to propose a plan for the President to consider.