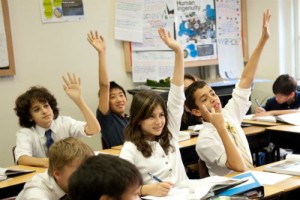 The most recent OECD report, titled “The ABC of Gender Equality in Education: Aptitude, Behavior, Confidence,” shows that the wage gaps between men and women worldwide might have more to do with career decisions that are being made by students much earlier than we think.

The results of this survey show that at the age of fifteen, girls are typically ahead of boys in reading, boys are only slightly ahead of girls in math, and there is barely any difference between the two in science. The report found that when they looked at attitude, behavior, and confidence, boys are more confident than girls even when they underperform, whereas girls tend to be more anxious about math, even when they perform well in the subject.

Despite the fact that girls tend to outperform boys in STEM subject areas, it is the boys who expect to have careers in engineering or technology. In the U.S., for example, 15% of boys expect careers in engineering or computing, compared with only 2.5% of girls (despite the fact that boys and girls perform similarly in STEM subject areas); girls are more likely to aspire to careers in health services.

What does this gender gap tell us about parent and teacher attitudes, work life, and society? The report found that parents are more likely to expect their sons to enter careers in STEM fields, except in East Asian countries where both boys and girls are expected to enter careers in STEM fields, and where boys and girls both outperform almost every other country. They also looked at how boys and girls spend their time outside of school and found that boys spend more time playing video games, while girls spend more time on homework. Another difference they found is that when boys read, they are more likely to read comic books, whereas girls are more likely to read fiction. Finally, girls are more likely to get higher grades in school than boys. The report suggests that this might have more to do with compliance than achievement, a result that might actually push boys to work harder, and to expect to work harder throughout their careers.

While much of this information might not seem new to many readers (boys like video games and comic books; girls lack confidence in math), the implications present some interesting ideas for parents and teachers. For example, the report suggests that students might benefit from greater choice in what they read at school. The report also suggested that there is some evidence that single-player video games might promote problem solving and math skills. Finally, educators need to think about the relationship between curriculum and instruction, gender, and student performance. For example, girls tend to perform better in math when they are allowed to solve problems independently. (Note: These topics have all been addressed by education researchers, such as those who study literacy, technology, and gender.)

As Michael Reiss noted in a post on the IOE London blog this morning, while teacher education used to focus on issues of inequality and teacher assumptions, teacher training courses today might be less likely to go in-depth into these issues. According to Reiss, “We need to get back to realising that how school students see themselves and their subjects is important. If we don’t, too many young people, especially girls, will continue to believe that science is not for them and that they aren’t really that good at it – and then they won’t be.”

For more on the OECD report released today (IEN will be retweeting posts as they come out during the day):

A closer look at gender gaps in education and beyond | OECD Insights Blog http://buff.ly/1M8GPt6

Obsessing over differences between boys and girls at school won’t fix anything http://buff.ly/1M8GWoy

Why are girls in the UK doing so much less well than boys in school science? | IOE LONDON BLOG http://buff.ly/1Nknl8a