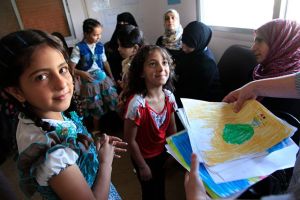 Our review of education news this week focuses on Nordic countries, where issues of government funding and the migration of refugees figure prominently. This brief scan shows that for countries such as Finland, Norway, and Sweden, the influx of refugees has implications for the classroom. For example, Norway is launching an innovation competition to teach Syrian refugee children to read. As The Nordic Page reports:

Norway is fronting an initiative to develop a smartphone application that can help Syrian children to learn how to read, and improve their psychosocial wellbeing. This will take the form of an international innovation competition in cooperation with Norwegian and international partners.

Erna Solberg, Prime Minister of Norway, also recently announced that Norway will double its support for education between 2013 and 2017. In a statement published on MSNBC.com, Solberg stated:

The gap in education funding is vast. Reaching the new goals will require concerted efforts and major investments. National governments must lead the way. Innovative partnerships, including partnerships with the private sector, will play an important part. A crucial outcome of the Oslo summit on education in July was the launch of the International Commission on the Financing of Global Education Opportunities, which was welcomed by the UN Secretary-General.

Similarly, Sweden has recently announced the addition of $3 billion to its national budget, intended to address education and housing issues, and to restore a welfare system that many feel has been depleted in recent years; however, at the same time the country has seen an unprecedented number of 6,901 people seeking asylum in just one week’s time—3,467 of them from Syria. As Reuters reports,

Local authorities will get more than 1 billion crowns extra for integrating refugees this year, with government also increasing spending to support refugee children in school. Total spending on refugees will rise to 19.4 billion crowns in 2016 out of a total budget of around 920 billion and up from an estimated 17.4 billion this year.

In contrast, Finland is grappling with a strong opposition to the influx in refugees, as well as controversial cuts to the education budget. According to The Helsinki Times, these cuts will have implications across all levels of education, but for primary education it will call particular attention to:

…the appropriations for the reduction of class sizes in primary schools. Terhi Päivärinta, a director at the Association of Finnish Local and Regional Authorities, believes it is consequently possible that class sizes will grow in some municipalities.

In each of these countries, plans for increases or decreases to educational funding were in the works long before this refugee crisis began. As they are now being implemented under somewhat different circumstances, it will be interesting to see how they unfold in the next weeks and months.