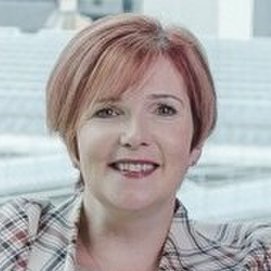 This interview with Gillian Hamilton appears as the second in a yearlong series on the public scholarship of women in education(al) leadership.

Gillian Hamilton is Chief Executive of the newly formed Scottish College for Educational Leadership. She has worked in Scottish education for 24 years, and has held posts as a Primary Teacher, Senior Teacher, Depute Head Teacher and Head Teacher in schools in Glasgow, North Ayrshire and East Ayrshire. In her work, Hamilton looks for ways to drive forward leadership development for teachers at all stages in their careers. In this interview, she shares her path to leadership, changes she has seen in the teaching profession over time, and how her engagement with Twitter led her to discover emerging conversations on the topic of women in education(al) leadership.

On becoming a school leader

I’m a teacher to trade, although it has been many years since I’ve taught. I became a teacher a way back in 1990, and I’ve worked in the Scottish education system consistently since then. I’ve taught in three different local authorities over my career. I started teaching in Glasgow, which is Scotland’s biggest local authority, and I’ve also taught in North Ayrshire and East Ayrshire. And when I talk about teaching, I’m talking about various roles in the system, so as a class teacher, a senior teacher, a deputy headteacher, and a headteacher, which is the equivalent of a principal. I became a headteacher in 2000.

So as I said, it has been a fairly long time since I actually taught a class, and I’ve been out of schools now since 2004. But that’s where I started. I initially came out of school on a temporary basis, and I worked for a local authority for a number of years. And what I did in the local authority was focus on teacher professional learning and leadership. I developed leadership programs and I worked on school improvement and that was really where I think I saw the significance that really high quality professional learning makes to the profession and to young folk.

Following that, I worked at the General Teaching Council of Scotland for three years and I was their head of educational services. My job there was leading the review of the teacher standards in Scotland, and leading the implementation of the pilot programmes of professional update. This process is now a requirement of all teachers in Scotland, and includes reflection against standards, engagement in professional learning and professional review and development. This was a fabulous opportunity in terms of working nationally on the development and implementation of a leadership agenda and to develop strong relationships with a variety of partners, working together to improve outcomes for children and young people. Then, a year ago, I became the first chief executive of the Scottish College for Educational Leadership (SCEL) firmly believing that my previous experience placed me in strong position to take this new organisation forward.

On changes in the teaching profession over time

In Scotland, we’ve done a lot of work to support the professional learning of teachers and school leaders. For me, it’s really important to have done the jobs that they continue to do – I think it helps bring credibility to my position, but it’s also important to recognize that those jobs have changed significantly over time. Teaching isn’t the same job as it was 25 years ago. Being a headteacher isn’t the same job as it was 15 years ago. So, much as I might bring credibility, it’s also important for me to recognize that these roles has changed significantly, so professional learning to support teachers needs to evolve too

In Scotland, we’ve had a major review of the school curriculum and Core Curriculum for Excellence. It began with a national debate way back in 2002, and a new curriculum that has been embedded over the last ten years in Scotland. This has seen a real shift in terms of thinking differently about pedagogy, thinking differently about teachers’ engagement in professional learning throughout their whole careers, and about a widening of the role of a teacher. There is now a recognition that being a teacher and being a school leader goes beyond the school community. There’s been a lot of work in Scotland linking education across the wider community, for example with social work and healthcare, and that’s quite a significant shift from when I was a headteacher 15 years ago. So we need our teachers, and we need our headteachers, to be thinking quite differently about how they work.

When we were reviewing the Professional Standards at GTC Scotland, we widened the original Standard for Headship to include a standard for middle leadership, and these are both included in the Standards for Leadership and Management. Across the standards, there’s a much more explicit focus on that widening of the role that I mentioned earlier. The revised Standards were approved by the GTCS Council in December 2012 and launched in March 2013. So they’ve been in place now for just over two years. We also introduced a Standard for Career Long Professional Learning to support teacher engagement in professional learning throughout their career.

I’ve only been engaging on Twitter probably for three or four years. When I worked at the General Teaching Council (GTCS), I was really just starting to develop an interest in Twitter and to use it quite tentatively. You’ll be aware of so many people doing that too, kind of lurking on Twitter – following links, following interests and things. And if I did tweet, it would be rarely and it would be just at a kind of surface level. None of the team I worked with at that point were really using Twitter, so we worked with the communications team at the GTCS and we got some training on the use of Twitter. I think it would be fair to say that all I managed to do at that point was develop a confidence.

When I came to SCEL just over a year ago, the team had been using Twitter quite well in terms of growing the organisation’s profile. So when they tweeted, they tweeted @TeamSCEL and the organisation started to become known for being quite proactive about Twitter use. So when I took up the post I decided that I wanted to engage quite differently with Twitter than chief executives might normally do.

At first, I thought that I needed to grow to be like other chief executives. So lots of chief executives are male, and they might be slightly older than me, and I looked up to my peers and wondered how I might be like them. And then I realized that actually, I didn’t need to be like them at all. What was really important was that I brought myself to work. That it was me as a chief executive, it was about me being a female in the role and about bringing my passion and energy for leadership and professional learning to this role and not growing to be like someone else.

And one of the ways that I reckoned I could do that was by being fairly visual and proactive on social media. If someone’s got a question about an organisation, about leadership, they can send me a direct message through Twitter, include me in a tweet, and look for that response. I’ve worked really hard to build that profile since I took up post. This is something that is significant in my learning – the idea that that behavior then requires you to behave differently, because traditionally if someone wanted to speak to a chief executive, they would probably go through four lines of communication, send two emails, have it forwarded on etc. Twitter removes all of that. And it makes you much more accessible, but that also brings a responsibility to be that accessible person that you’ve said that you are.

In Scotland, I can think of at least another one or two chief executives who use Twitter the same ways I do, or even more. A great example is Louise MacDonald, who is chief executive of Young Scot in Scotland. And she uses Twitter a lot too. She and I often engage via Twitter, and she’s probably much better at it than I am. The chief executive of the SSSC – so that’s the regulatory board for social care – uses Twitter quite a lot. But I can think of some chief executives of national organizations in Scotland who are not on Twitter at all. It’s growing but still quite early days for those in senior roles, but there’s also a whole Twitter community in Scotland that you might describe as grassroots. There are some fabulous teachers really engaging with Twitter for their professional learning, sharing thinking, sharing debates, including links to research, links to articles, and it’s fabulous. It’s a great way to engage with that kind of learning.

There’s also an organisation across the UK, with a heavy base in Scotland, called Pedagoo, which is focused on professional learning. They use Twitter to mobilize, so they’ll share thinking on Twitter, but they also host local events – Pedagoo Local. We’re supporting them with an enquiry meet in November. So really good examples of sharing learning and going below the surface.

On an emerging conversation on women in education leadership

There is a growing movement and it is happening fairly quickly. So, my initial engagement with Twitter wasn’t about being a woman in leadership, it was really just about professional learning in leadership. What I found was as I started to engage in Twitter communities, that there was a whole body of work round about women in leadership. And one of the examples was the great Twitter chat that started off being about having more female leaders in keynote conferences – doing keynotes at conferences – which very quickly became a much wider engagement about challenges to women in leadership, and how as a group we can support each other. Small commitments moving forward. So there’s a real sense that Twitter provides a kind of coherence. Where you might be thinking you were working in isolation, or not know where to find specific research or information, Twitter provides an ideal opportunity for the informal sharing of a vast array ideas and views.